This is the scary moment when two scuba divers get very close to a green anaconda, the biggest snake in the world. Most of us might find this to be the scariest thing we’ve ever done, but for Bartolomeo Bove and his friend Juca Ygarape, it was a dream come true. They caught the event on camera, but some people find it hard to even look at it.

Do You Know About Green Anaconda || Giant Anaconda

People say that the Green Anaconda is the largest species of snake on Earth. They can get as long as 29 feet and weigh as much as 550 pounds. The green anaconda is a type of boa that lives in South America. It is also called the giant anaconda, common anaconda, common water boa, and sucuri. It is the longest and heaviest snake species that is still alive. Like all boas, it is a constrictor that doesn’t have poison.

As a professional diver and marine videographer, Bove has always been interested in these big animals that live underwater, like great white sharks and green anacondas, which are the biggest snakes in the world. But sharks are easier to spot than green anacondas, which live in marshes in South America and are very hard to see in their natural environment. But they can be seen in the clear waters of the Formoso River in Brazil, which is the only place on Earth where this is possible.

“The only places in South America where you can dive with anacondas are in rivers and other bodies of water near Bonito,” Bove said, “because the water is so clear.”

So, Bove and Ygarape went to see this giant, and luckily, they didn’t come back empty-handed. Deep in the Formoso River, the two divers saw a green anaconda that was 23 feet long and weighed almost 200 pounds.

Divers say that anacondas are very calm, even though it might be scary to see such a big animal swimming next to you. Their footage shows that they are right.

“The anaconda swims calmly and peacefully, paying no attention to us at all,” Bove said. “Sometimes she swims up to me, curious about my camera, and licks the lens.” “The anaconda’s behavior busts the myth that it is an aggressive, violent animal that can put people’s lives in danger.”

You can watch video footage here 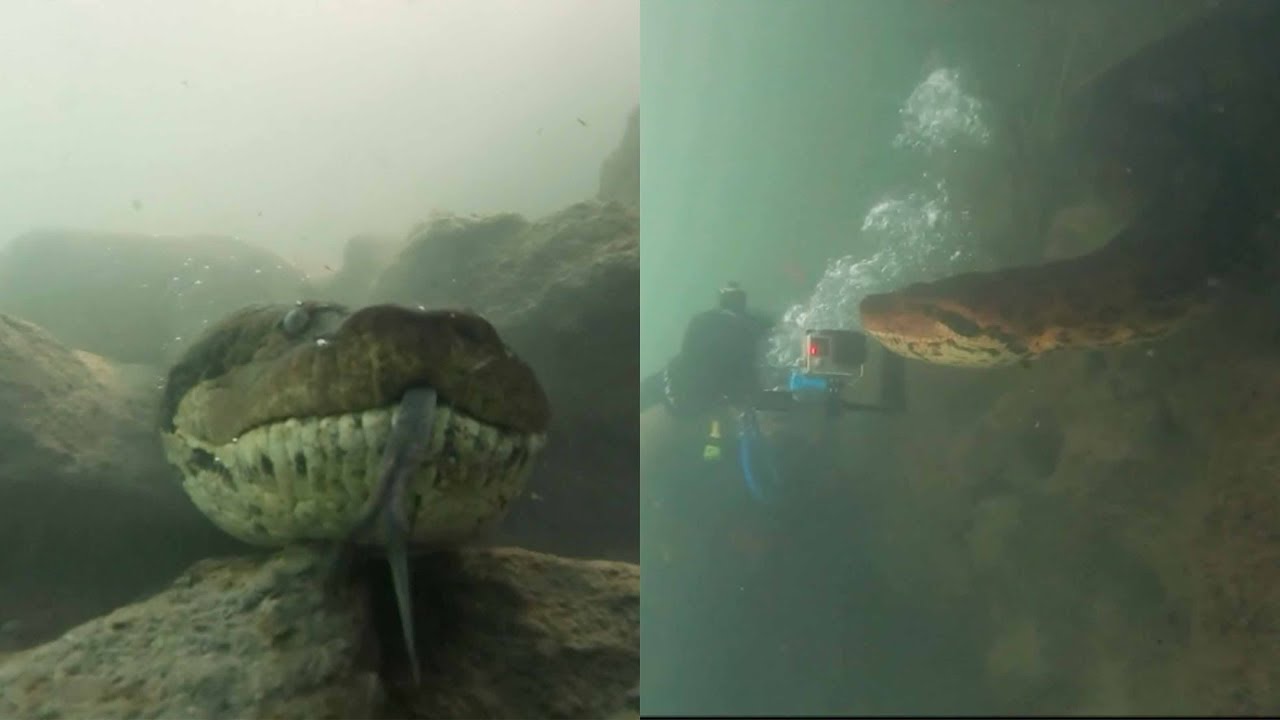 What are the green anacondas’ predators?

At the top of the food chain, anacondas don’t have any natural enemies. People’s fear is the biggest threat to their survival. Many anacondas are killed because people are afraid the huge snake will attack them. Their skins are also hunted because they can be made into leather or used as decorations.

How much does a green anaconda usually weigh?

Most of the time, the green anaconda is dark green with black oval spots. It has spots on its sides that are yellow-ochre in the middle. 148.5 kg on average (330 lbs.) Anacondas eat mammals, fish, caiman, birds, ducks, turtles, and other animals that can live in water or on land.

What can green anacondas eat?

What’s it eating? In the wild, green anacondas are carnivores that eat large animals like tapirs, capybaras, deer, peccaries, fish, turtles, birds, aquatic reptiles, dogs, and sheep. Even though it is rare, anacondas have been known to attack jaguars and people. They are fed rabbits at the zoo.

Anacondas can grow up to 29 feet long, weigh more than 550 pounds, and have a diameter of more than 12 inches. The females are much bigger than the males. The yellow, dark-spotted, and Bolivian anacondas are all from South America and are all smaller than the green anaconda.

Is a green anaconda a nice pet?

When raised properly, anacondas raised in captivity can be calm and easy to handle as pets. However, they do get big, and their strength should be respected. This species is not for people under the age of 18 or for people who don’t have enough experience working with large constrictors.

Related: Maggie was shot 17 times and is now a therapy dog.