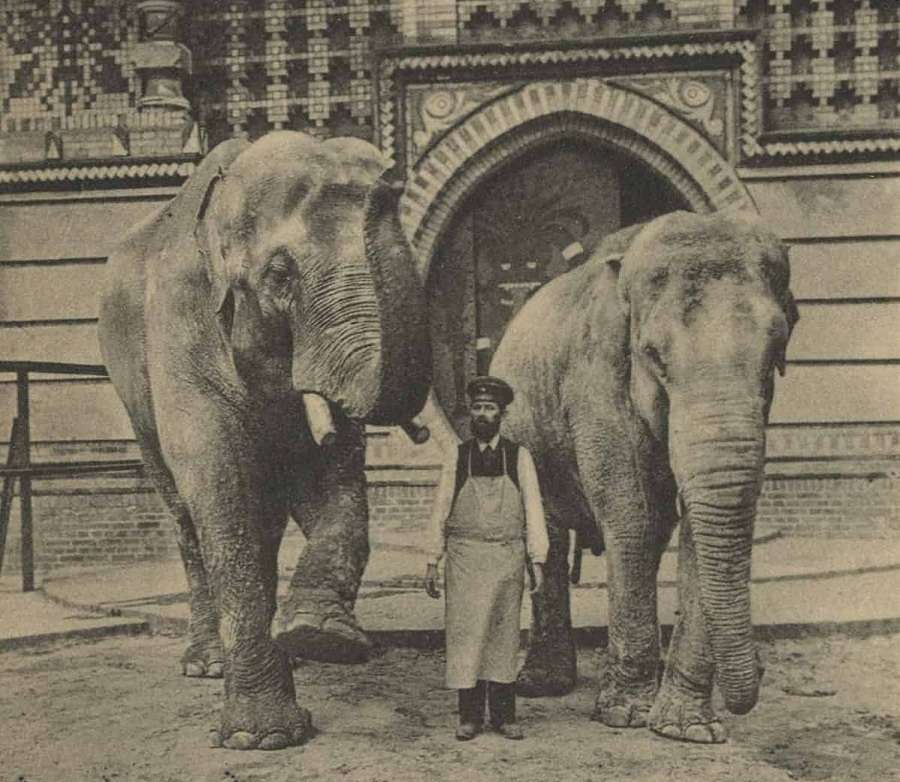 Tragic Story of Berlin Zoo Elephants: Then, in November 1943, disaster struck when Arthur Harris, the head of RAF Bomber Command, launched the “Battle of Berlin,” an attempt to win the war by reducing the German capital to ruins while also destroying the Luftwaffe. The attempt failed, but Berlin was severely damaged before Harris admitted defeat and the bombardment stopped. The Berlin Zoo had been destroyed by that time.

On the evenings of November 22nd and 23rd, 1943, the biggest damage was done. Over 750 RAF heavy bombers bombed western Berlin on the 22nd, including the Tiergarten district, where the zoo is located. Several high-explosive bombs and about 1000 incendiaries were dropped on the Berlin Zoo during a fifteen-minute period that night, beginning around 7:15 p.m., blasting and setting fire to several animal enclosures, including those housing elephants, monkeys, and carnivores. Because the city’s water mains had been blown out by explosives, firefighters were unable to put out the raging fires.

Almost a third of the zoo’s animals were murdered in less than a quarter of an hour. But it wasn’t over yet. The RAF returned the next night for a second big raid, and at approximately 8 p.m. on November 23rd, the zoo’s aquarium was entirely wrecked when a stick of bombs hit it directly, killing most of the animals and spreading them far and wide. The next morning, people walking along the nearby Budapeststrasse were shocked to see the dead bodies of crocodiles on the road. Their bodies had been thrown there by the blast.

Such incidents sparked terrifying claims that some dangerous creatures had left the zoo alive and were wreaking havoc on Berlin’s streets. Elephants were claimed to be stampeding through the streets, slaying and mauling anything they came across, while tigers were said to be prowling the streets, slaughtering and mauling everything they came across. The claims were substantially exaggerated, as are most rumors; while some potentially hazardous animals did escape their enclosures, almost all were pursued and killed within the zoo’s limits. The only creatures to escape the zoo were a dingo, which was later recaptured, as well as some monkeys and birds.

At the start of WWII, the Berlin Zoo housed nine elephants. The only pachyderm to survive the Allied bombing raids was Siam, (Elephant in feature image – L) an Indian elephant bull. The first was murdered in 1940, and then seven more were killed in 1944 by bombings, leaving Siam alone in what remained of his enclosure.

The so-called “strategic bombing” of Berlin started in the summer of 1940. Winston Churchill, the British prime minister, wanted to bring down the morale of the German people by destroying their capital.

The Royal Air Force’s first raid, on the night of August 26, 1940, was a military disaster. Six of their fifty bombers crashed; a woodshed in a Berlin neighborhood was demolished; just two Germans were slightly injured; and the only serious loss was an elephant in the Berlin Zoo, as we already witnessed.

The British, on the other hand, did not take long to get their act together. They changed the technology in their bombers right away, which made their navigation systems and bomb targeting more accurate.

The goal of the bombing was to get people to move into cellars and bunkers so that incendiary bombs could be used to destroy everything on the surface.

“If the US Air Force joins us, we can wreck Berlin from top to bottom.” It will only cost us 400 to 500 planes, but Germany will lose the war. ” Sir Arthur “Bomber” Harris, the head of Bomber Command in the United Kingdom and a vocal supporter of this policy, said as much.

Since March 1944, the Americans have been attacking the capital during the day while the British have been wreaking havoc at night. The continual air raids were the main determinant of life. As Jörg Friedrich, a German author, later explored in his book about Germany’s bombardment, fear became a public state.

However, placards posted in front of official buildings in Berlin stated that the “operation must continue unabated.” It was true, and life went on as usual; the mail, for example, continued to be delivered, though it occasionally had to make its way to the bomb shelters during the never-ending air raids.

Even if the U-Bahn and S-Bahn were still operational, they were constantly congested with exhausted, belligerent, and foul-smelling passengers. Nonetheless, they retained the well-known German characteristics of discipline and morale.

Even the Nazi regime’s chief publicist believed the situation was not hopeless. “Bombing is still preferable to Bolshevism,” he persuaded the majority of Berlin residents. On November 27, 1943, Joseph Goebbels dictated the lines to his secretary.

Goebbels went on to say that neutral foreign countries were “full of respect for Berlin and its people.” 500,000 people were homeless by the end of November 1943.

From 1944 forward, the daily struggle for food became more intense. Because so-called nutritional replacements became the population’s food staple in the Third Reich, IG Farben, a pharmaceutical and chemical corporation, was colloquially known as the “Reichskonditor,” or Reich’s cake shop.

In Berlin, cabbage was frequently available only after hours of waiting in line. Because there was no gas in some parts of Berlin, people couldn’t cook for days.

Berliners joked about their “city of department stores” with gallows humor, saying, “Here were houses, there were houses.” Because of a lack of fat, swap your Führer image for an almost new frying pan, “said a letter hung from a tree. Anyone caught saying such defeatist things, on the other hand, was arrested or shot.

The Berliners’ spirit and courage, like that of the Londoners before them, did not crumble. The strategic bombing failed miserably. Carpet bombing victims rarely consider how they may overthrow their country. They are more concerned with hot soup and having a roof over their heads. And it was here that the Nazi regime’s organizational prowess was demonstrated.

The Nazis constructed five enormous public air raid shelters, one of which was located at the Berlin Zoo. The Flakturm Tiergarten, or “Zoo anti-aircraft gun,” stood above the shelter, which could protect 8,000 people.

Because of the bombing strikes in the latter weeks of the war, all air raid shelters were overcrowded. Unfortunately, none of this protection extended to the zoo’s animals.

After each attack, an army of emergency services known as the Klappstuhlgeschwader, or “Folding Chair Squadron,” was dispatched. These volunteers distributed tea, liverwurst bread, and cigarettes.

The National Socialist Party held a solid grip over victim assistance, operating under the slogan, “The Führer provides for his people, to whom he also delivered the war.” “Our walls may break, but our hearts never will,” Hitler’s ardent supporters wrote on banners hung in the wreckage.

However, only around 2% of the population could be accommodated in bunkers. The folding chair squads had been stationed in front of the entrance doors since the morning until the dreaded alarm went off. Most schools had been evacuated in 1943 for the Kinderlandverschickung—the evacuation of children to the countryside—and most of these helpers were mothers with small children.

However, not everyone was shielded. The Jewish community was denied access to the underground safe havens—no shelters were ever constructed for them. In 1943, Jews were only allowed to live in Berlin as forced workers, in so-called mixed-race marriages with Aryan spouses, or illegally in Berlin’s underground.

One of the Jews hiding from the Nazis was Joel Köenig. His main concern wasn’t the bombs; instead, he hoped that they would lead to the end of the Nazi regime’s brutality. To make ends meet, he stole from the Nazis and slept in a broom closet at night.

The zoo was discovered as a prospective sanctuary by Köenig in March 1943. He took refuge in the aquarium’s building, which was both peaceful and warm. Unfortunately, that refuge came to an end in November when the aquarium was hit by a direct bomb.

In November 1943, a journalist called Warner emerged from the Berlin Zoo bunker to witness “an extraordinary sight,” but it was horrifying. Everything was on fire, including the Kaiser Wilhelm Memorial Church and the Ufa Palace.

The firestorm rushed through the streets at nearly 50 miles per hour, ripping cars and pedestrians apart and spreading black, smelling clouds of smoke. Between 7:58 and 8:20 p.m., 753 British planes dropped 2,500 tons of explosives and fire bombs.

Warner had the feeling that Berlin had been completely demolished. It was also the day that Siam’s seven surviving elephants died, leaving him alone.

Source: 1 | 2 – All the information and photo credit goes to respective authorities. DM for removal please.

Yes, yes, we all know what a terrible thing war is. However, before you shed too may tears for the Berliners and their zoo animals, consider the many other cities throughout Europe that suffered the same fate from German bombs and shells. What goes around comes around.