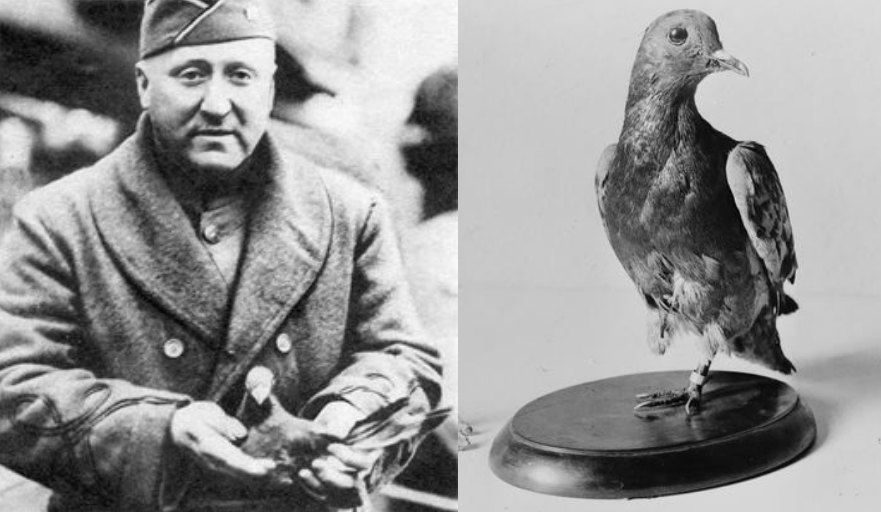 Cher Ami – The Pigeon Who Saved the Lost Battalion

Most people do not think of a pigeon when they think of a soldier. Pigeons play a crucial role in relaying signals between military forces. The 77th division of US Army, sometimes known as the Lost Battalion, was saved thanks to the acts of homing pigeon Cher Ami.

Cher Ami was born in 1918, and her name means “dear friend” in French. Cher Ami was one of 600 Army Signal Corps pigeons dispatched to France to help with battlefield communication. Homing pigeons are well-known for their ability to find their way home, even when they are in unfamiliar territory.

This skill was investigated by John Hagstrum, a geologist with the United States Geological Survey, in 2013. He discovered that pigeons can hear noises at lower frequencies, allowing them to form a sound map in their heads. They can travel through unknown locations using this acoustic map to get “home.” When the pigeon corps was founded at the start of World War I in 1914, the Army recognized this skill. Because the telephone and radio were still new technologies with limited availability in the field, pigeons remained the most reliable means of communication. Short notes were placed in a little canister connected to the pigeon’s leg, which the pigeons would take to their destination.

Cher Ami was one of over 600 carrier pigeons used by the United States Army Signal Corps during World War I. Despite breakthroughs in communications technology during the war, carrier pigeons were important. Because radios were huge and yet connected by fragile cables, they were less reliable. It was also not always possible to lay additional lines rapidly, and it was often exceedingly risky to do so. Despite their unpopularity, pigeons proved to be a reliable mode of communication.

Homing pigeons may fly at speeds of up to fifty miles per hour, making them an efficient mode of communication. Despite their speed, these pigeons were typically easy targets for enemy gunfire. In fact, German machine gunners practiced spotting and killing these birds with their lethal MG 08s, which could fire more than 500 rounds per minute. Pigeons are also a potentially dangerous mode of communication because if one is shot down, the message can readily be received by opposing forces.

The carrier pigeon was ultimately acknowledged for its brave services during the Meuse-Argonne Offensive in 1918. The 77th Division of the United States Army advanced too far into the Argonne Forest on October 2nd, 1918, and became caught behind German lines on the slopes of a hill. Major Charles Whittlesey’s 550 troops from the 306th, 307th, and 308th regiments, cut off from reinforcements and supplies, held out against a significantly larger German force for several days.

The only way the Americans could communicate with their own lines was via carrier pigeon, which was far outside the radio range. It didn’t take long, though, to understand that the sky was just as deadly as the ground. Even though it was trapped in a hellish meatgrinder of machine gun fire and rain, the Lost Battalion stood its ground against fierce German attacks.

The Lost Battalion’s location was accidentally bombarded by American heavy artillery on October 4th, killing thirty men while they held the line. Major Whittlesey and his troops stood there watching as bird after bird dropped from the sky, which had been ripped apart by German fire. Major Whittlesey desperately sent out his last pigeon, Cher Ami, to the American lines with a note that simply stated, “We are along the road parallel to 276.4.” Our own weaponry is launching a direct assault on us. Stop it for the love of God. ” Cher Ami was now the Lost Battalion’s only chance to walk off that hill alive, with fire showering down from all sides.

The daring bird took off directly into German fire, dodging bullets along the way. His good fortune, however, did not last long. Soon after takeoff, Cher Ami was hit in the chest, and American soldiers watched in terror as their last hope plummeted to the ground. Cher Ami, despite all circumstances, rose to her feet! The small bird, wounded but alive, flew into the air again, charging head-on into wave after wave of bullets. He covered 25 miles in around half an hour towards the end of the journey. He was severely injured when he arrived at base, but he was still alive.

Cher Ami was saved by army medics, but his right leg was barely connected to his body and he was blind in one eye. However, as a result of Cher Ami’s arrival, the artillery came to a halt and moved to other firing positions distant from the American lines. Shells began to fall on German positions the next day, relieving pressure on the battered 77th and turning the battle to America’s advantage. Thanks to Cher Ami’s sacrifice, a total of 184 men made it back to the American lines on October 8th.

Cher Ami was awarded the Croix de Guerre for his role in saving the 77th Division, one of France’s highest military decorations for bravery in battle. “There isn’t anything the United States can do too much for this bird,” declared General John Pershing, commander of the American Expeditionary Force.

Cher Ami was able to return to the United States thanks to its trainer, Capt. John Carney. Cher Ami died on June 13th, 1919, at Fort Monmouth, New Jersey. Cher Ami’s body, on the other hand, was preserved and given to the American government with dignity. It’s difficult to say how many families owe their existence to one brave bird’s bravery and self-sacrifice. Cher Ami is currently on display at the Smithsonian Museum of American History to commemorate his life. His bravery will never be forgotten, and his narrative has carried on in the hearts and imaginations of Americans for decades.

In accordance with current Signal Corps records identifying the bird as a “female bird,” Cher Ami has typically been referred to with feminine pronouns. The Smithsonian, on the other hand, refers to Cher Ami as a “cock bird,” or male pigeon. In 2021, the Smithsonian Institution conducted DNA testing to officially confirm Cher Ami’s biological sex in commemoration of the bird’s 100th anniversary of display at the Smithsonian. When Cher Ami’s DNA revealed that she was biologically male, it put an end to a century-old mystery. Cher Ami’s brave flight is currently on exhibit at the Smithsonian’s National Museum of American History, where visitors may learn more about Cher.