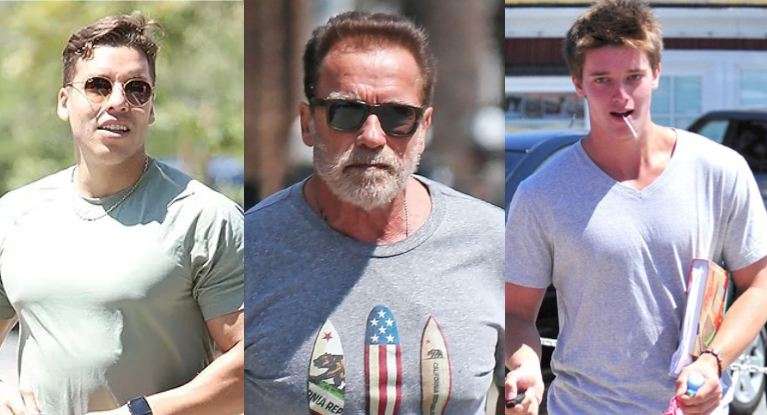 Arnold Schwarzenegger’s family was surprised by his two sons, Joseph and Patrick

Arnold Schwarzenegger has a total of five children; four of them are from his first marriage to Maria Shriver, while the fifth child, Joseph Baena, is from his relationship with a former housekeeper named Mildred Patricia Baena. Recently, Joseph and Patrick’s important events came as a surprise to the Arnold family and brought them back around to each other.

After 25 years of marriage, Arnold’s first wife, Shriver, filed for a divorce from the Terminator actor in 2011. However, the property settlement has delayed the divorce’s finalization all these years.

Because of his father’s relationship with housekeeper Mildred Baena, Joseph Baena became well-known. Since then, Baena has gone on to become famous on his own, particularly with his recent appearance on Dancing with the Stars, a decision that sparked some negative feedback from his family.

Baena would be expected to follow a particular path in life given that he is the son of a former governor and an action movie legend. Baena and his family claim that dancing wasn’t one of the planned possibilities. But their surprise is precisely the reason he’s even more driven to finish this in time for season 31.

Joseph Baena Beginning his career on “Dancing with the Stars,”

Season 31 of Dancing with the Stars premiered on September 19 and features Baena, who has been putting in a lot of effort to provide his best performance. He announced his participation and the fact that he would be paired with professional dancer Daniella Karagach Pashkova a week ago. He said of their routine, “She has been pushing my butt in the studio, making sure that I’m drilling everything.”

Given his past as a bodybuilder who has appeared on the cover of Men’s Health, that is saying a lot. But a portion of that results from the work’s unfamiliarity. He continued, “We’re getting it down. It’s really different from what I’m used to in the gym and involves a lot of cardio. My favorite. This is fantastic. I enjoy taking on new challenges.

His family was not expecting him to succeed on “Dancing with the Stars,” so they were surprised.

However, Baena’s transition phase demonstrates that having high expertise in one aspect of fitness does not necessarily translate smoothly into other aspects of exercise and exertion. When they learned he would be competing on Dancing with the Stars, the Arnold Schwarzenneger and Baena families reportedly felt the same thing.

Because dance isn’t particularly ingrained in our family, Baena said that “my whole family is really astonished that I took on the task.” I’m here to help the family overcome that stigma in a way. Baena continued, “So far, it’s going fairly well. I even have some positive news that strengthens my case. We advanced to the next round. Best of luck in the upcoming rounds!

For their son’s birthday, Maria Shriver and Arnold Schwarzenegger reunited

To commemorate the birthday of their son Patrick, Arnold Schwarzenegger and Maria Shriver got back together. Patrick posted a selfie with his parents on Instagram to document how his 29th birthday celebration transformed into a family event. I appreciate the birthday greetings. 29,! Crazy! Time flies, “he adds alongside a picture of himself holding his birthday cake between his parents, writing.”

In celebration of her son’s special day, Shriver also published a birthday message on her Instagram profile. She wrote the caption, The caption read, “Happy, happy birthday, my beloved @patrickschwarzenegger! You are an amazing son, and I love you so much. You are smart, kind, loving, caring, fun, and funny… Join me in wishing Patrick a happy birthday!”

Patrick and Christopher are Schwarzenegger and Shriver’s sons, and Christina and Katherine are their daughters.

The actor Arnold Schwarzenegger is now maintaining appearances in his films as he most recently made an appearance in the TV program Little Demon. He has worked on a few other things, such as the TV series Outrider and the movie The Legend of Conan, in which he plays the title role.

Related: Sylvester Stallone and Jennifer Flavin are reportedly back together

Hello my friend! I want to say that this article is amazing, nice written and include almost all vital infos. I’d like to see more posts like this.

An American Foxhound born with a short...