Sleeping stray dogs should be left alone, but it appears that one driver disobeyed this advice and is now getting punished. This driver threw a sleeping dog out of his parking spot, and it returned with a gang and a terrible mood.

According to reports, the same dog later returned with a gang of friends, ready to exact some rightfully deserved revenge. China currently has a huge and expanding population of stray dogs.

Chinese people have a history of taking stray dogs off the street and putting them in dog fighting rings, which is very unpleasant for the animals. The country’s rules against animal abuse are notoriously weak, if they exist at all. They don’t do enough to protect their dogs.

If a dog or other animal is injured, the owner must be found in order to pursue a claim for property damage. This is why it makes sense for someone to believe they can just treat stray dogs like trash and escape punishment, like the man in this incident.

A stray dog appeared to have claimed the space because he was contentedly lying there. That is, until the evil driver stepped out of his vehicle, kicked the unfortunate dog, causing it to flee, and took control of the area. Though the man probably believed that was the end of it, the stray had other intentions.

Instead of taking physical action against the man, this pup made the wise decision to leave and not return until he had gathered a sufficient number of buddies to assist him. Photos show that at least three dogs were part of the angry group that attacked the driver’s car.

They can be seen tearing through the car and wrecking it in the most incredible way possible with their strong teeth. The ruthless driver would almost certainly have to pay a large sum of money to repair the damage these dogs caused.After all was said and done, it could be claimed that these dogs’ combined efforts were quite successful.

The dogs joined together to chew up the wipers and the fender on the man’s valuable car, which they then left for him to discover. Personally, I’m hoping that every dog comes back and hides to see the man come back.

It must have been a big shock to him to see that his car was completely damaged and that there was no way to identify what or who had caused such serious damage. We can’t be certain that these dogs weren’t motivated by a desire to see justice served in their actions.

Some dogs have been known to damage property when agitated or anxious. The stray who was booted was probably under a lot of stress as a result and thought the man’s car would make a good target. Perhaps his buddies had the same thought.

Ultimately, if not for one shocked neighbor who took a few pictures of the dogs, this would have been the ideal crime. They took pictures of the damage and handed them to the car’s owner, who was told that a gang of stray dogs was responsible.

I truly believe it’s much better because the man is aware that his car was damaged in more than just a random act of street violence. Then, maybe, he’ll start to respect dogs a little bit more. 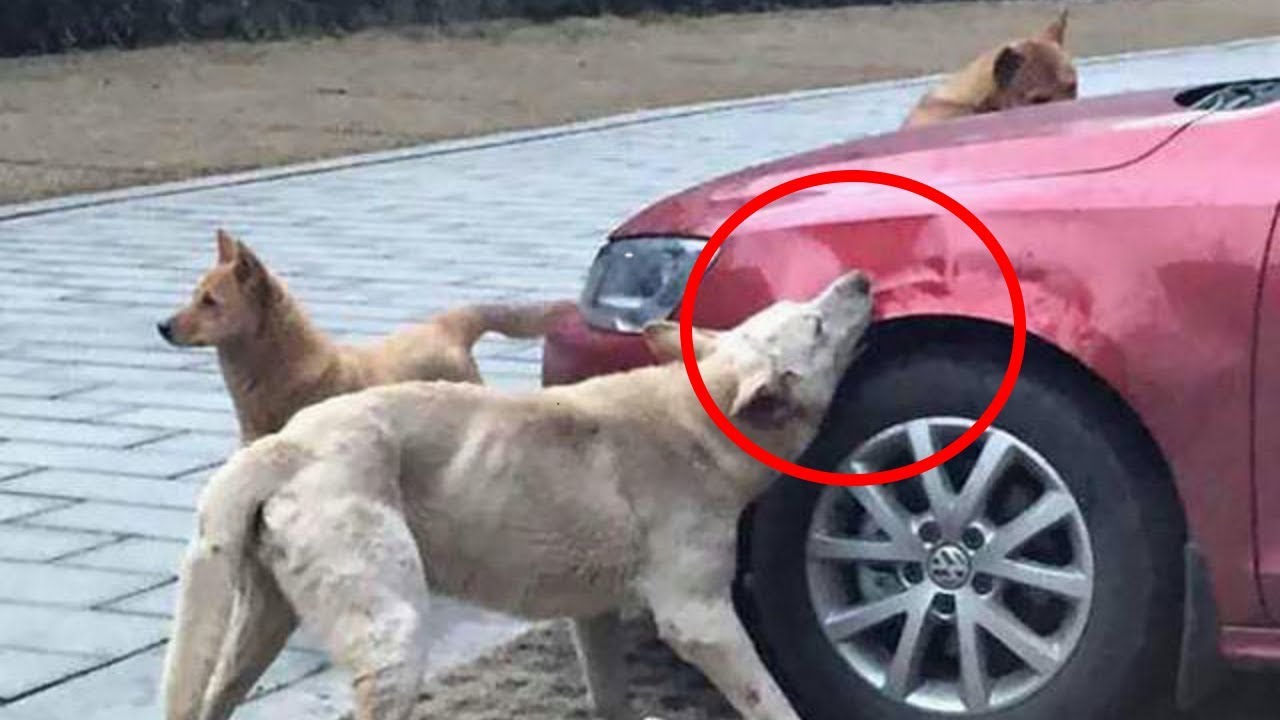 Related: Maggie was shot 17 times and is now a therapy dog.